FORJO makes it two from two 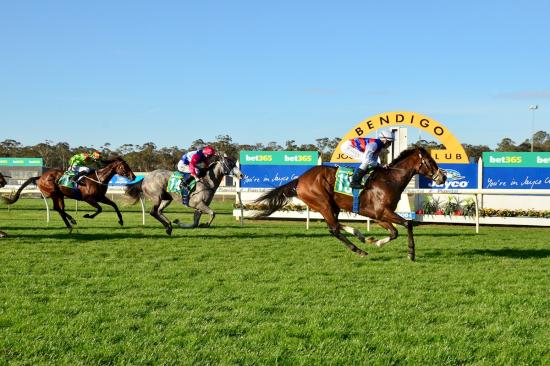 Smart 3yo filly Forjo (SNITZEL x Showstoppa) was impressive in winning her first start back from a spell at Bendigo on Friday over 1,000m in a BM 64 handicap. Beginning smartly Forjo took up a very handy position just outside the leader and held that position throughout the early running, although drifting a little wide on the turn she soon took on the leader in the straight and finished strongly to win impressively by 1.75 lengths. This was only her 2nd start having broken her maiden on debut at Geelong in January by a similar margin.

Forjo was bred by the partnership who raced her dam the attractive and capable metro winning mare Showstoppa (SHOW A HEART). Forjo is the first foal for Showstoppa. Breeders Kevin Murphy, Peter McMahon, Carol Shinn and Patrick DeKretser have given Showstoppa every chance st stud having produced fillies by SNITZEL (Forjo), NOT A SINGLE DOUBT (Facts as yet unraced 2yo), an athletic weanling filly by SHAMUS AWARD and now in foal to SMART MISSILE. The breeders have retained both fillies of racing age and race them in partneship with other family members and friends. Forjo looks set to deliver more success for her group of enthusiastic owners.

Showstoppa has been resident at Crowningstone since retiring to stud her progeny being raised to late yearling age before moving on to Lee and Shannon Hope’s very successful operation for breaking and training.