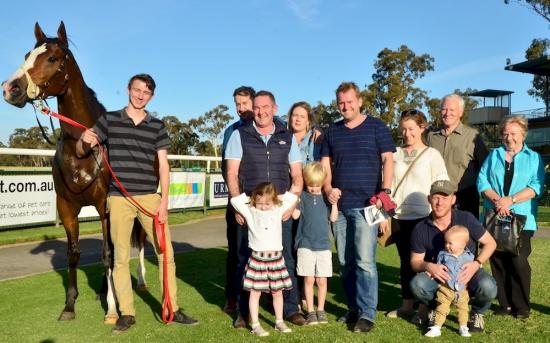 Forjo showed she is well above average with a dominant win against older horses at Bendigo on Friday and keeps her perfect record intact to take her career tally to 2 wins from her only 2 race starts. Put aside after her impressive debut victory at Geelong in early January, the well- bred "Snitzel ex Showstoppa" filly resumed over 1000m under promising apprentice, Ben Allen. She began brilliantly from the barriers to position on speed albeit 3 wide and after taking the turn awkwardly, balanced up to career away for a soft win on the line with margins to the placgetters of 1.75L x 1.5L in a time of 57.63.

The stable will now set “Forjo” for the “Creswick Series” for 3YO’s at Flemington with the first heat to be run at Flemington on June 11 and culminates in a Listed race final on July 6.

Forjo named in honour of Joanne Murphy, is raced in partnership with several Murphy family members, Dad Kevin, Sister Belinda, husband Jonathon Swann along with their close friends, Daniel Duke, David Geary, Patrick Kelly, Anthony Fogarty and Christian McCann. Also sharing in the partnership are fellow co-breeders, Pat & Suzie De Kretser and Peter & Pat McMahon. By coincidence the race was named the "O'Farrell Robertson McMahon" Hcp although no relation to the McMahons but an omen just the same.