Clouds creates the scene for the day! 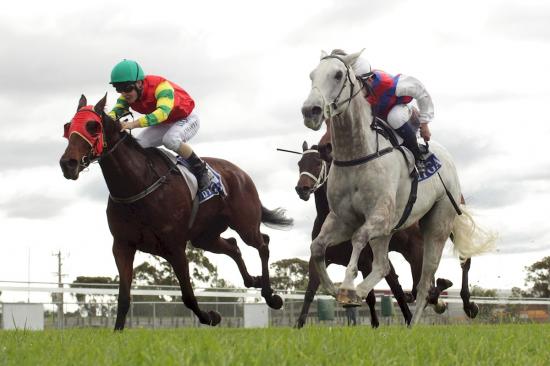 Werribee on Thursday was the host of the transferred Wangaratta meeting and "Clouds" created the scene for the Hope Racing team by dead heating with another local Kilmore galloper in Race 2 on the card. Resuming from a spell the striking 4YO grey was lining up for only his second career start under gun apprentice, Ben Thompson. Beginning well from the barriers he positioned the Bradbury's Luck gelding outside the leader over 1100m course. Kicking clear at the top of the straight the challengers came but he fought back tenaciously over the final 100m. It was a close call on the line with the judge failing to find a margin between the 2 local gallopers in the 'Select One Catering Maiden Plate.

Clouds is bred and raced by the Upjohn family with well-known Kilmore resident Bronwen Upjohn of O’Donnell Thoroughbreds heading the partnership along with her parents, Janice & William and twin sister, Stephanie. Broken in and educated by Bronwen, highly regarded as the best in the business, handed over the reins to the Hope Team to apply the finishing touches. Co -Trainer, Lee said "The raw 4YO has a nice future once he learns his craft and will be better suited over 1400m."