The Browns proud as punch! 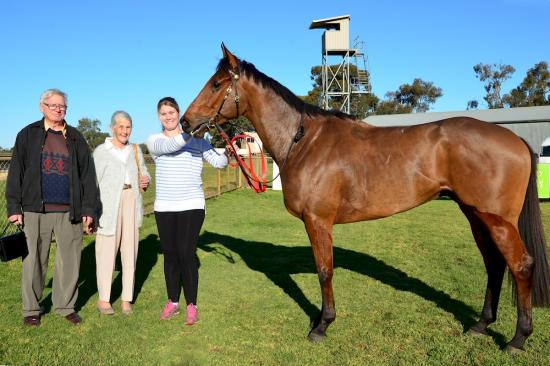 "Proud Wolf"  captured his third win from his past five starts at Echuca last Saturday (July 16) in the feature race on the card, "1Print BM78 1400m". The 4YO son of Amadeus Wolf came with a well timed run by young apprentice, Ethan Brown to grab track specialist, "Moulin" by 0.3L on the line from "Top Ravine" a short half head away in third place.

Co-Trainer, Lee said the gelding is a "little trier and a real Winter horse. The drop of 3kg from his Sandown run made a difference as he is not a big robust horse. The distance is about as far as he wants and we will look for a similar race in a fortnight's time although his handicap rating may force us to find a mid week race in town".

One would think it was a real family affair with the Brown surname featuring in the Ownership as well as the jockey but it's a coincidence only. Flowerdale residents John & Ellen Brown (pictured) bred Proud Wolf from former stable race mare Paru's Pride and he now takes his career tally to 4 wins with 2 minor placings from 11 starts for earnings over $50,000 which is something their proud of!