"Rosie gives Owners something to cheer for" 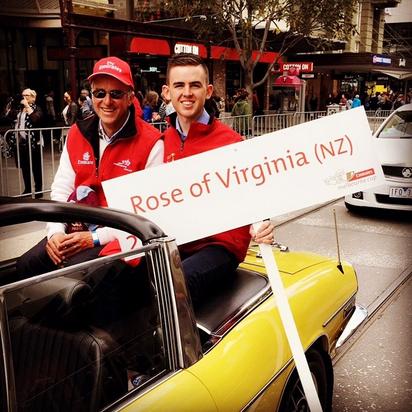 It’s doubtless there were plenty of people wondering why on earth the owners of Rose Of Virginia decided to pay up for Tuesday’s Melbourne Cup after the mare’s run in the Lexus Stakes on Saturday.

In four runs this campaign, her best effort has been a fourth in the Group 3 Coongy Cup at Caulfield on October 15, where she was beaten 5.25L.

Not surprisingly, the Lee and Shannon Hope-trained mare, which will jump from barrier 8 under 19-year-old apprentice Ben Thompson, is the rank outsider in the Cup, rated a $201 chance with Sportsbet.

But for the Sheldon family (Grant, his wife Margie and their son Joel), Rose Of Virginia’s owners, her odds are irrelevant.

The fact the daughter of Thorn Park will contest the race that stops a nation, the richest two-mile handicap in the world, which was first run way back in 1861, represents something special – someone special.

It means a hell of a lot.

“This time last year our 26-year-old son (Kyle) was diagnosed with cancer, and by February he had passed away,” Grant Sheldon told G1X.com.au.

“We had his memorial service in the grandstand at Flemington, Bryan Martin MCed it, then about a week after this horse came on our radar.

The Sheldons, who raced last year’s Bletchingly Stakes and Regal Roller Stakes runner-up Platinum Rocker, liked the look of Rose Of Virginia and were keen to race her for a season or two, then add her to their broodmare list at their Macedon Park farm.

They purchased her from trainer Lance Noble, with whom she was initially trained by in her first 33 starts in New Zealand.

“We bought her privately after her run in the Auckland Cup (in March, where she finished second), with a lot of help from Randwick Bloodstock Agency, Brett Howard’s organisation, and also Luke Murrell of Australian Bloodstock. Without those two guys the deal wouldn’t have been done,” Sheldon said.

During the late afternoon at Flemington on Saturday, rumours were abound that the Victoria Racing Club (VRC) committee would consider using their discretionary powers to make change to the ballot order.

Vengeur Masque, Tom Melbourne and De Little Engine were the three outside the 24 that had been paid up for.

The uncertainty left the Sheldons on tenterhooks.

“I was on the phone to (chief steward) Terry Bailey and (Racing Victoria’s general manager of racing and chief handicapper) Greg Carpenter – I was more than nervous,” Sheldon explained.

“I thought, ‘I’m not just going to sit there and let this happen without at least trying my best to state the case for the horse’.

“Terry Bailey has got a million things to do on race day, but he was courteous and respectful and he took my call, and I’m really, really grateful for that.

“I tried to ring Greg Carpenter, but he was already in the chairman’s room. To his credit, he rang me straight afterwards.”

Rose Of Virginia heads out for the Lexus Stakes. (Pic: Brett Holburt/Racing Photos)

Sheldon conceded Rose Of Virginia “hadn’t had a great day” on Saturday and his initial thoughts were not to pay up.

But then he took some advice from an unlikely source.

“I took counsel from (jockey) Craig Williams, who’s ridden for me before but has never put his leg over this horse. He has no vested interest whatsoever,” Sheldon explained.

“Life’s too short and we needed something to cheer for.”

Despite her form and $201 quote, Sheldon is confident she will be competitive on Tuesday.

The Sheldons will cheer Rose Of Virginia in the Melbourne Cup, ‘the people’s race’ that has hosted many battlers’ dreams.

And it’s odds-on they will shed a tear in doing so.

“Our son, Kyle, who’s no longer with us...to us it’s shades of Media Puzzle,” Sheldon said, referring to Damien Oliver’s emotional Cup win aboard the Irish horse in 2002, just a week after his brother Jason died from a track fall in Perth.

“We don’t expect her to win, we really don’t. We just want her to get around safely, hopefully acquit herself well and give young Ben Thompson and the Hope Racing stables a sense of achievement and pride.”