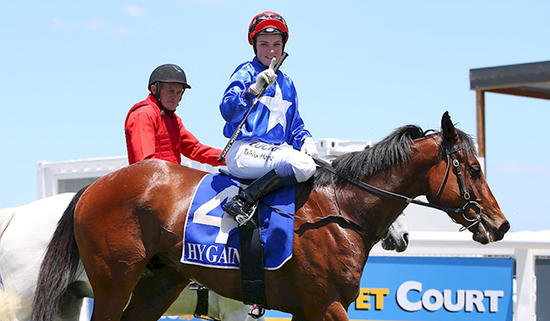 Tahlia Hope rode home her first metro winner at just her second attempt on Saturday, the apprentice riding Invincible Al to a commanding win in the O'Connor 3YO BM70 Handicap (1000m).

It's been a dashing December thus far for the daughter of trainer Shannon Hope, the 18-year-old collecting the Port Fairy Cup on Thursday aboard Judges for Daniel Bowman.

Hope said it was a deliberate effort by her team to delay her riding in the city, having had her first metro ride at Sandown in August (Alberti).

"My family decided to wait until after spring to get going," Hope said.

"Today, we thought we might be just a long shot to have a go at a Saturday meeting.

"Patrick's got him [Invincible Al] in very good order, and he's going forward from here I'd say."

It was Hope's 35th winner overall, and her sixth for Plumpton trainer Payne from 34 rides for him - and she said it was fitting his stable provided the breakthrough metro winner.

"It was [a thrill], especially for Patrick. He's been trying to get me into town for a while now to get my career going, so I was lucky enough it paid off for him," she added.

"He's pushed me, and now I've ridden my first city winner for him."

For Hope, it was straight back to her usual business - riding in the country - with two rides for Shannon and grandfather Lee at Benalla later in the day.