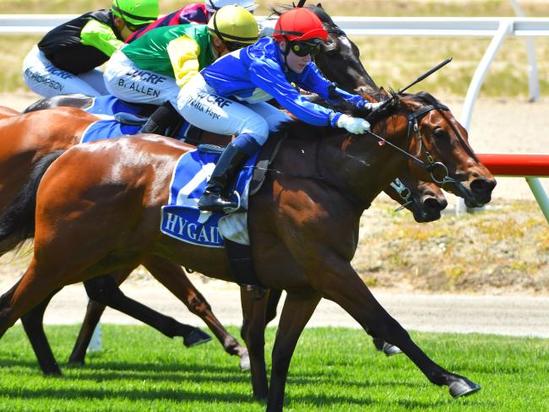 Armed with a toasted ham and cheese sandwich on a plastic plate, Hope told stewards he was leaving the meeting to make the three-hour drive to Benalla, where she had rides in the last two races of the day.

Her ride on the Patrick Payne-trained Invincible Al was just her second venture to town. Her previous ride at a Sandown mid-week meeting was on an unplaced long shot.

The 18-year-old was born into a racing family. Her father Shannon Hope is in a training partnership with her grandfather Lee Hope. And her uncle is champion Sydney rider Blake Shinn.

Hope said her father and grandfather had kept her out of riding in town until they thought she was ready.

“I had a ride at Sandown just before the spring carnival and my family decided to wait until after the spring to get going,” Hope said.

“Today we thought we probably might be just a long shot but thought to just have a go at a Saturday meeting but Patrick’s got him in really good order and he’ll be going forward from here I would say.

“(Payne’s) been trying to get me into town for a while to try and get my career going.

“Luckily it’s paid off for him. He’s pushed me and now I am here to ride my first winner for him in the city.”

Hope said it always seemed, with her family background, that she would be a jockey.

“I have always ridden show ponies until the age of 15,” she said.

“And then I decided to go to the breaker and learn how to ride and then I went to the racetrack.

“I am loving it. I went through a quiet patch but hopefully it will pick up now.”