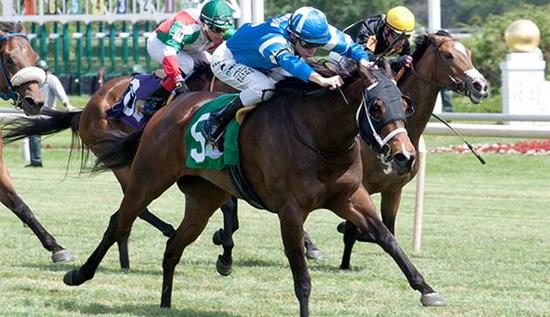 Australian jockey Blake Shinn, based at Arlington International Racecourse since June 5, picked up his first U.S. win Saturday aboard the Arlington Racing Club’s Brisson. The 29-year-old journeyman rider from Kilmore, Victoria was making his 16th start in America when he got the leg up from Breeders’ Cup-winning trainer Wayne Catalano aboard the 4-year-old daughter of Ghostzapper. Breaking from post five in the field of eight, Shinn secured a spot on the rail aboard the 3-2 betting favorite and sat seven lengths off the pace in the early running of the one-mile turf race. The Melbourne Cup-winning jockey allowed the filly to move up towards the leaders on the backstretch, angled off the rail through the turn and swung five-wide entering the stretch to the cheer of the Racing Club’s excited owners on the apron. Brisson extended her stride under Shinn’s urging and rolled to the lead, hitting the wire 1½-lengths the winner.

“I got a smooth run throughout the race, she always traveled well,” said Shinn. “She blended into the turn really nicely and showed a great kick. I thank Wayne for the opportunity, and Steve Leving my agent, who is working hard to get me good rides. It’s a great feeling. Thanks to everyone who supported me in the club and back in Australia; it’s a fantastic thrill to get the opportunity to ride a winner here.”

Shinn, a regular rider for Australian Racing Hall of Fame trainer Gai Waterhouse, is currently in the U.S. working for Wesley Ward but has picked up mounts from a variety of horsemen in the Chicagoland area. Trainers from around the country are reaching out to Leving with inquiries, and with a winner under his belt the interest around Blake Shinn is certain to increase.

Brisson’s win was also a first for the Arlington Racing Club, a group of 175 members that signed up for the 2017 season. Each member paid $500 entry into the club which was created to introduce racing fans to the ins and outs of racehorse ownership. Club members were able to tour the backstretch and meet their horse in the weeks leading up to the race. A large number of members were able to be there for the win on raceday and filled the winner’s circle to its brim for the photo with Brisson and Blake Shinn.

“It was fantastic,” commented Arlington’s Howard Sudberry. “The people have been rooting so hard for a win, and they’ve been through a couple different horses. It was so neat to see [them] starting to cheer when Brisson made her move at the top of the stretch, then it was pretty clear she was going to win so it was like a victory lap at that point. It was a great thrill.”