Tahlia hopes her comeback is soon! 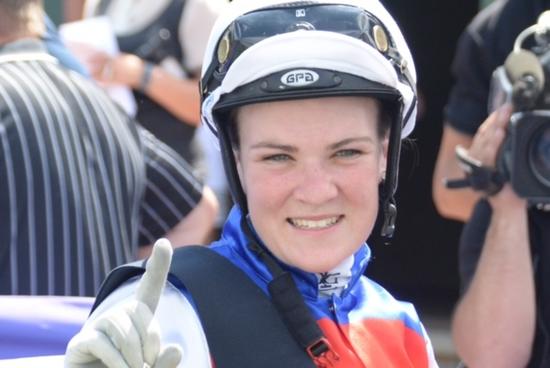 Since she was 4 years old, Seymour-based apprentice Tahlia Hope, has always been aboard a horse, whether it has been in a show ring or on a racetrack. But on March 2 this year, Tahlia who is apprenticed to her father, Shannon and grand-father Lee Hope, riding the thoroughbred came to a sudden halt, the result of a fall in warming-up prior to a barrier jump out at Ballarat. Tahlia had nine pins and a plate inserted in her smashed right ankle, tibia and fibula, and has been nursing the injury ever since.

"It's been so frustrating just sitting on the couch whereas sitting on horses is all I've known" said Tahlia.

After a prolonged period in a moon boot and once removed, the physio sessions begun to strengthen the injured ankle in preparation for her return to race riding. "I have been doing physio three times a week and recently strapping the stable horses for Dad and Pa". Tahlia said. She was seen at Bendigo on Sunday, strapping Angelology for Patrick Payne, whom she combined with to win last years Kerang Cup and stable horses, Danvito and Eramosa.

Two weeks ago, the young apprentice made her first step back to riding when she hopped aboard her pony. Last Friday she reached another milestone advancing to track work on one of her favourites race horses, Best Suggestion. "It feels good to be back and I am setting myself a goal of 6 weeks for my return to race riding. I will need plenty of trials beforehand to get my fitness levels up  and hopefully everything goes okay" she commented.

The fourth year apprentice has ridden 43 winners and still is able to claim 2kg in the provincials. Once back in action and with the support of her family it shouldn't take too long to see her back in the winners enclosure.