Riding on a wave 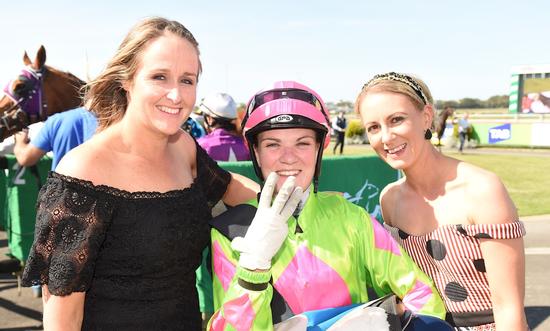 A treble at Warrnambool on Thursday rounded off a great week in the saddle for stable Apprentice, "Tahlia Hope". Since returning to race riding late August after a long lay off due to injury, Tahlia has been riding on a crest of a wave with 17 winners already this season of which 6 were over this past week. It is interesting to note last season Tahlia rode a total of 19 winners and she has nearly surpassed that figure already in the short time she has been back riding. Not afraid to travel to accommodate the requests of Trainers has paid dividends and she has covered plenty of territory, riding one day at Wagga then the next at Warrnambool. "Have saddle will travel" appropriately applies to her at the moment although a minor suspension incurred at the Echuca meeting on Tuesday gives her a few days off to recharge before returning to riding next Wednesday.

Currently in her fourth year of her Apprenticeship Tahlia has nearly outrode her 2kg claiming allowance and her long term goal before her apprenticeship finishes is to ride out her full claim which will be a great achievement for the hard working and popular jockey.