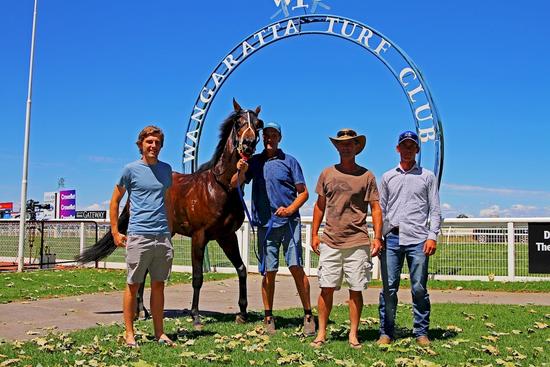 It didn’t take the stable too long to register their first winner in 2018 with "Filbert Way" taking the honours at Wangaratta on January 2nd. Lining up for his sixth start the 4YO gelding was given a perfectly executed ride by stable apprentice "Tahlia Hope" who took full advantage of the good barrier draw. Settling along the fence for majority of the race, the pair manoeuvred a passage through the field to be within striking range approaching the home turn. Once the gap appeared the horse powered away for a convincing win to score by 1.75L in the “Anytime Fitness" Maiden Plate. With the application of Blinkers for the first time and stepping up in distance were key contributing factors for the Murtajill sired horse. Still learning his trade the win will give the horse a real confidence boost going forward and he should keep improving with race experience.

Co-Trainer Lee when interview said “the horse has always showed talent but just lacked maturity. He added the Blinkers certainly helped today and Tahlia gave him a 10 out 10 ride”

The win was particular rewarding for the stable as they shared great success in the past with Owners "Steve, Linda and Ashley Donnison" of Madam Gangster fame. Even though he may not reach her heights they will certainly have some fun times ahead. Filbert Way was purchased by good friend and Co-Owner "Gary Mudgway", an astute pin hooker who found the "Murtajill x Piece of Class" at the Magic Millions Weanling sale in 2014. Also joining in the Ownership group is the Maher family, "Janelle and Bryan" who incidentally educated the horse for the team and "Shaun Kelly" a close friend of the Donnison family and first time Owner. So in some capacity everyone has played a role in the victory by Filbert Way and let's hope there are plenty more wins ahead.

Proud Owners in the winners circle are Ashley and Steve Donnsion with Bryan Maher.