Beau is drawn to her! 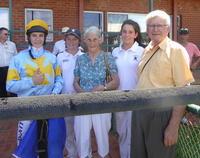 Beau is drawn to her!

“Drawn To You” ended a frustrating run for long time stable clients, John & Ellen Brown of Jenal Australia, when she powered away to claim the “Beatons Silk Cut Meats Maiden Plate” at Benalla on Saturday.

An excellent ride by apprentice jockey “Beau Mertens” had the 3YO filly positioned in the box seat for the majority of the race until staking their claim in the home straight. Over the final furlong she overhauled the short priced favourite, Recalcitrata to career away on the line to score by 1.75L and a further 3L margin to the third horse, Supreme Renegade.

Co-Trainer, Lee said the filly will now head to town to target some restricted 3YO races over 1400m during the summer period of racing.

A homebred filly by Primus is raced under the Brown family banner of "Jenal Australia" and is the first progeny to win for dam, Drawbridge Open, herself a winner of 6 races.

Pictured celebrating the win of Drawn To You are grand childen, "Bailey & Morgan Gandolfo" along with "John & Ellen Brown".