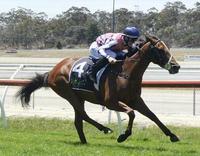 "Prima", once tagged New Zealand’s best Maiden after splitting 'Mongolian Khan and Volkstok’n’barrell' in the Gr 2 Avondale Guineas as a 3YO, recorded a strong win at Kilmore to finally break his Maiden status as the short priced favourite.

Only pint sized and just touching 15 hands, the son of Sir Percy was aided by a terrific ride by promising Apprentice “Mitch Aitken”. After beginning well, he chose to settle off the pace in transit. Looking to be in an awkward position approaching the home turn, he didn’t panic and waited for a run to appear. Once presented "Prima" finished on strongly along the inside to draw away on the line in the "Cool Rooms Galore" Maiden Plate over 1462m.

Raced by an enthusiastic group of Owners, "Robert & Keith Tunnicliffe, Mark Brady and Natacha Otto", Prima will now head to Flemington in the coming weeks to tackle some restricted 3YO/4YO races programmed over the summer months. Bred to relish longer distances this will be a great opportunity to really showcase his talent and repay his owners for their patience.