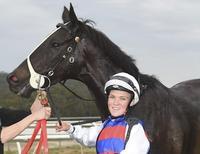 November 1st 2015 will be a day Tahlia Hope will always remember as she claimed her first career win at Kilmore in front of a big crowd of spectators out in force to support the young 17Y0 Apprentice jockey. The win was made even more special as Danvito is trained in partnership by her Father, Shannon and Grand-Father, Lee.

Instead of being his regular strapper and trackwork rider, Tahlia was given the opportunity to ride the Danroad 5Y0 gelding and we are pretty sure he sensed who was on his back. After a frustrating run of outs and a tendency to miss the start of late, the team was confident he would respond to Tahlia. Despite being marginally slow away, Tahlia made an early mid race move and took the horse to the front. With ears pricked Danvito relished the leading role and held off a late challenge from stablemate, Indelo over the final stages of the race to score by a half a head to the roars of the crowd.

The 17-year-old couldn’t hide her delight, punching the air after she crossed the line at only her second race ride. Amidst great scenes on return to scale, Tahlia briefed the Owners like a true professional.

Tahlia is the 3rd generation of the Hope family to become jockeys and on course to witness the special occassion was her 92YO Great-Grandfather, George.

Danvito has now redeemed himself and will always be remembered as the horse who gave Tahlia her first race winner with many more to come.