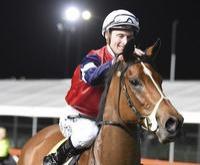 Shinn steered Fenway to a Group I win in the Vinery Stud Stakes (2000m) during the Sydney autumn carnival before the daughter of High Chaparral resumed with a sound effort in the Group II Let’s Elope Stakes (1400m) at Flemington last month.

Fenway found herself in a seven-horse field in the $200,000 Stocks Stakes but Shinn kept his mount off the fence early in the event, forcing Brad Rawiller to push on to sit second on the fancied May’s Dream.

"I had to be positive early,” Shinn said. "I didn’t want to be in a position to be dictated to. I wanted to dictate the race myself and I had the barrier to be able to do that."

"I had to make May’s Dream work a little bit so I can get myself into clear running.”

Vlad Duric set the pace on the Gai Waterhouse-trained Amanpour before quickening the tempo at the 600m while Shinn kept Fenway within reach of May’s Dream approaching the home turn.

The pair got to Amanpour with 300m to before Shinn drove Fenway past May’s Dream in the last 75m to score by three-quarters of a length, giving the Sydney-based rider another win for his step-father and step-brother.

"It means a lot to me to win a race like this for my family,” Shinn said.

"It was an exciting race from the 400(m) but she dug deep and she just delivered.

"From the 700(m) I pulled her out wide and we know she’s better over a little bit further so I used her staying ability and when it got into a dogfight, I knew she’d be there for me.”