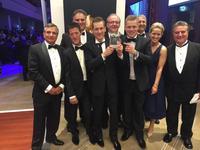 He may have missed out in the Sydney jockeys’ premiership but Blake Shinn was able to seal the Australian premiership at Gosford on Thursday with victory aboard a horse for the future.

Shinn was in the running to take out a second Sydney jockeys’ title until a rampant Hugh Bowman rode eight winners over the final three metropolitan fixtures of the season to claim the title.

But at the final New South Wales provincial program of the 2014/15 calendar Shinn finished on a high note, clinching his first Australian premiership.

"It’s a great feather in my cap to achieve that, I’ve never done it before,”Shinn said.

"It’s a reward for all the hard work I’ve put in through the year, travelling all around Australia.”

To cap off a big year,Blake also received the 2015 "Personality of theYear" from the NSW Racing Writers’. The Daily Telegraph’s Ray Thomas said: “This award was selected by the NSW Racing Writers’ Association and Blake received a commanding number of votes from racing writers to take out the award. It is fair to say Blake once had an uneasy relationship with the media but these days he is extremely obliging to interview requests and is always willing to promote the racing industry. Perhaps it is sheer coincidence but his relaxed, calm demeanour also resulted in a career-best season for the jockey. Others to attract votes were Chris Waller, Gerald Ryan, Gai Waterhouse, Tommy Berry and Ron Quinton.”