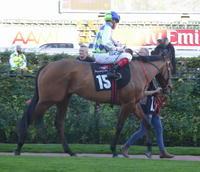 FOR Lee Hope, winning his first Winter Championship is all about the timing.

And Sir Andrew, he says, is the right horse in the right race.

Sent to Lee and his son Shannon by a group of New Zealand owners earlier this year, Sir Andrew was set with one goal in mind: the 1600m $151,500 showcase event on Flemington finals day.

The program started to script, with Sir Andrew motoring home at his first Australian start for an eye-catching second over 1400m.

He then hit an unexpected detour in a 1400m winter series heat — jockey Craig Williams found himself buried away behind an impenetrable wall, the horse finishing hard-held for seventh.

As a result, Sir Andrew failed to qualify for the final and left the Hopes with a dilemma — despite the horse crying out for 1600m, they had to run in another 1400m heat to chase points.

The horse did its bit under Williams, finishing fourth behind Amovatio, qualifying for the Winter Championship and the plan was back on track.

“We ended up a pair further back than we anticipated last start, which made it difficult to make up the ground the way they were racing ... but, really, he was racing like he was looking for the mile,” he said.

He said Sir Andrew, which won the Hastings DHL Guineas over 1400m in heavy ground last year, was primed at its fourth run for the 1600m final.

“There’s no doubt about him running the mile. He was looking for a mile last start,” Hope said.

“As long as he gets a clear run and he gets to the outside, he’ll run home well.”

A victory will be a perfect push towards spring for the father-son country stable, with a number of stable stars returning to the fold, including"Fenway, Sabatini, Pittsburgh Flyer, Madam Gangster, Choose and former Perth mare Platinum Rocker".

Hope said Platinum Rocker was sent to the stable after being bought at private sale and won a recent trial, but if the seven-year-old mare showed at any stage she didn’t want to keep racing she would be sent to stud.

He said they would look at aiming Fenway at the Caulfield Cup, but it would depend on the timing being right.