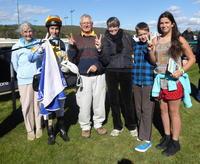 "John and Ellen Brown" enjoyed a great day at Kilmore races on Monday when their two homebred geldings scored under Cory Parish to provide them with their first Owner/Breeder double.

In the first race on the program “Indelo” set the scene for the day with a grinding win to score by a half a length under hard riding by Cory. Although it was more the fact the son of Niello didn’t quite know what to do when he hit the front half way up the straight.

“He hasn’t been the easiest horse to ride as he tended to over race in his races and restricting him in distance was a way of teaching him to relax. We always knew he wanted a mile but needed to wait until we were satisfied he was ready for the step up in distance” said Co -Trainer Lee. The 3YO is slowly learning his trade and coming into the Winter months should keep improving as the distances get longer.

The second leg of the double came in Race 4 when lightly raced gelding,“Proud Wolf” scored in the “Arilla Retirement Village” Maiden Plate over 1200m. Caught three wide in transit, the 3YO by 'Amadeus Wolf x Paru’s Pride' hit the lead in the home straight and showed plenty of determination to score by a head in a tight finish on the line. Having his first start back from a spell, the promising gelding will benefit from the run and looks to have a great preparation ahead this campaign.

The Brown family races their horses under the “Jenal Australia” banner and have enjoyed recent ownership success with “Choose, Danvito & Best Suggestion” but there is nothing more satisfying than breeding the product yourself. It may be a long haul from conception to the racetrack but the smiles on their faces showed it was worth the wait.

Interesting to note both Dams, “Paru’s Pride & Indi” who hails from the family of star 3YO filly Sabatini, were former race mares from our stable before joining the Jenal Australia broodmare barn so both wins were particularly rewarding for the everyone involved.

The Brown family pictured sharing the success of the double with jockey, Cory Parish.