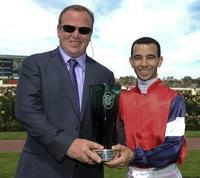 Joe Moreira bought his magic to Flemington on Saturday and the Hope Team were recipients of a perfect ride aboard “Pittsburgh Flyer” in theMSS Security Stakes. Regarded as one of the world’s best jockeys, he settled the 3YO daughter of ‘Street Cry” off pace in transit before weaving his magic at the 300m to bring her to the outside and run down former top 2YO filly Earthquake over the final stages of the race.

“What a thrill to have a rider of his calibre for a small stable like ours and combine together to win a feature race on Super Saturday” commented Co-Trainer “Shannon Hope.

“It was a tough race for a 3YO Listed race and was equivalent to a Group 2 or 3 by the quality of opposition. It is a terrific result for the Owners who also bred the filly and are great supporters of our stable.”

There are plenty of options for the talented filly with a possible interstate trip on the cards. Races like the "P J Bell" over the ATC Autumn carnival, the "Sangster Stakes in Adl or the "Winter Stakes" in Queensland are all likely targets. The team will let the dust settle before mapping out her program.

Pittsburgh Flyer provided the stable with their 4th Black Type race in as many weeks to cap off a fantastic Summer/Autumn period with ther fillies and mares.

Later in the day, Sabatini was most unlucky with an amazing performance to come from an impossible position at the tail of the field to fly home and narrowly get beaten in the Gr 2 "Kewney Stakes". Another talented filly"Fenway" also raced by "Alpara Lodge" finished 4th in the "Matron Stakes" after being bottled up for most of the race. She will progress on with her Oaks campaign and is likely to line up in the "Vinery Stakes" at Rosehill in a fortnight.