Lil is not that Evil! 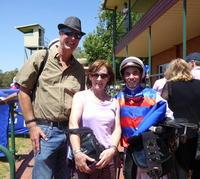 Lil is not that Evil!

It was worth the wait for Owners and Breeders, "Tony and Sue Schneider"when their homebred mare, "Evil Lil" made a winning debut at Benalla on Monday in the "Timber Products Maiden Handicap" over 1200m.

Ridden by "Dean Holland', he settled the 4YO mare back in the field before seizing the opportunity in the straight to take a run and career away for a dominant win over the final stages of the race. Although a bit lost and shying away from the winning post, she still had plenty in hand to overcome her inexperience to officially score by 1L on the line.

Evil Lil is the first progeny from their former handy race mare, "Evil Tricks"and her winning performance was very reminiscent of her dam who was a terrific wet track performer throughout her career. Evil Lil is by "Hold That Tiger" and with this breeding combination it’s safe to predict she will be a force over the Winter months of racing.

It has been a team effort involving Bronwen Upjohn from "O’Donnell Thoroughbreds" to get this mare to the racetrack but she proved patience and perserverance does pay off!

We congratulate "Tony and Sue Schneider" on the terrific win by Evil Lil and hopefully there is many more to come.