Stating his Mark as Owner! 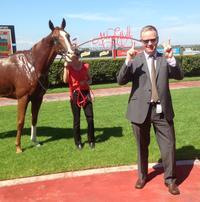 Stating his Mark as Owner!

When the talented Choose raced away to an easy debut victory at Seymour in February last year Mark Adams was there.

And he backed up when the Lee Hope trained chestnut won her next start at Sandown.

And once again when she headed to Morphettville for start number three – Mark hopping on a plane, determined not to miss any winning moment.

And he was rewarded with Choose again in the winner’s circle.

Those wins, Mark says, were such an incredible thrill that she could pretty much have retired on the spot and he would’ve been happy.

“Actually that win at Sandown was just about enough – it was my first city winner and it was unbelievable!”

And he is all the more incredulous a year down the track with Chooseagain in stellar form, winning her last two at Flemington in determined fashion.

“Both times she has looked as though she might get beaten but she fights back.”

Choose’s Flemington successes are the culmination of a long time dream of Mark’s – to have a horse good enough to salute at headquarters.

And now he has cheered home a winner there twice in two weeks!

The pressure was off last week as she had already achieved what I had dreamed off – but it was so exciting again.”

Choose first caught Mark’s eye when she headed through the ring at the 2012 New Zealand Ready To Run Sale at Karaka.

Having already raced horses with the Lee Hope stable,Mark was interested to see what was purchased – watching online – and he was so keen on Choose that he rang “within about thirty seconds to get my share!”

Also bringing in a few friends,Mark admits that he never envisaged just how good Choose would be.

“You start out with no expectations, then they win a maiden and you hope they can win again in the country – and then you dare to dream that they might win in town!”

Mark was bred to race horses, a love of the sport instilled him from an early age.

“My grandparents lived at Dromana and I’d go down there on school holidays,” he recalled.

“They were members at Mornington and Balnarring so we’d head along to the races.”

Cheering home the high class Albany Bay, Peter enjoyed sharing his success with Mark who has great memories of those times.

“I was very young when Albany Bay won the Moonee Valley Stakes but I was well aware of what was going on!”

“When she was racing I’d travel around the country watching her.”

A Group One win in the Winfield (now the Coolmore) Classic was a highlight for Acushla Marie but Mark’s dad could’ve raced an even better horse if not for being talked out of a yearling half-brother to Albany Bay.

“Dad said to Geoff Murphy that ‘we might as well go and buy Albany Bay’s brother.’”

“But Geoff Murphy said his legs weren’t right so they didn’t bid.”

And that horse was Our Waverley Star, a Group One winner who became part of racing folklore after his epic duel with Bonecrusher in the 1986 W.S Cox Plate.

But such near misses are part of the game and Mark is thrilled with the success he has had, also excited about the lightly raced four-year-old Abbreviate who is set to resume soon having won his maiden at Benalla by an impressive 3½ lengths last spring.

And, like so many proud owners, Mark has been quick to pump his winnings back into horses – Choose helping to pay for shares in a couple more with Lee Hope; a Mastercraftsman and an Alamosa.

It seems in racing that luck seems to breed luck so hopefully Choose’s metropolitan wins are just the start for Mark who loves nothing more than being on course to cheer on his babies!