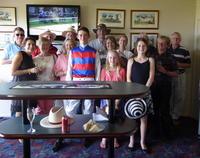 Two stable runners for two winners gave the team a perfect result for the weekend. Off the back of "Choose winning" at Flemington, "DANVITO"followed suit with another dominant display at Benalla on Sunday.

Opening this campaign with a win at Benalla on December 23, "Danvito"was full of confidence heading into his second run on Sunday. Carrying the No. 1 saddlecloth and drawing the inside barrier, Apprentice "Regan Bayliss", persued the lead from the onset and after a minor battle safely held the front. Switching off beautifully in transit, the Danroad 4YO gelding proved superior against his rivals to take out the Hygain 58 Handicap by a length and record back to back wins at Benalla.

Like his stablemate, "Choose", the "Danroad x Pure Indulgence" gelding was also bought from the 2012 NZ RTR sale for a poultry $16,000. He has already repaid his Owners with career prizemoney earnings now reaching $ 23,460 from his 8 starts.

The Co-Trainers plan to take the 4YO through his grades whilst building his confidence with a particular focus on a Winter racing campaign and an eventual step out in distance as his breeding suggests.

"Danvito" is raced by a large partnership of Owners with familar names also sharing in the ownership of Choose - "Andrew Scannell, John & Ellen Brown, Bob & Jenny McIntyre and Norm & Annette Stephens" to cap off a great weekend for them.