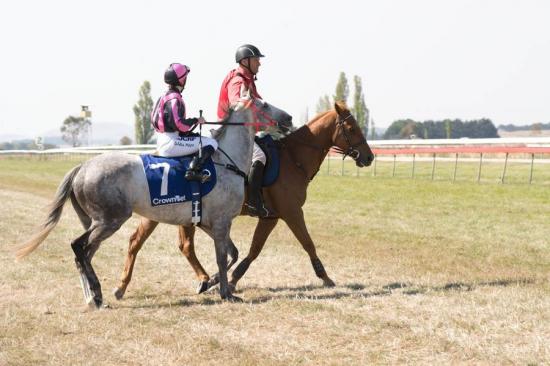 It was a day of firsts at Camperdown Cup day on January 16 for "Tahlia Hope" as she shared the riding honours with her first riding double partnering Bertoni and Unique Storm to victories. However she was not so lucky in the Stewards room incurring her first riding suspension albeit for 5 days.

Making the long trip to Camperdown for three rides was worth the drive when her first ride for local Kilmore Trainer, Hanna Powell won in a tight photo finish. Tardy away from the inside barrier, Tahlia drove Bertoni through to settle just behind the leaders. Utilising the inside running Bertoni shot through in the straight to take the lead and hold on in a driving finish over the 1000m.

The second leg of her double aboard Unique Storm had a significant meaning as her dam, Clearly Unique gave "Blake Shinn" his first winner back in 2003, some 13 years ago. She has proven a handy broodmare since for former local Trainer, Dennis Beriman who shifted his training base to Warrnambool. The family has always showed plenty of natural speed and Tahlia used this asset to position the mare outside the leader. Following instructions to the letter she came to the middle of the track and the pair proved too good on the line.

Clocking over 50 rides on the provincial circuit since she began riding in November is a super effort and she has developed a support network of Trainers keen to utilise her services in this short time. Keen to follow in her footsteps is "Emily Azzopardi" who was recently inducted into the RV Apprentice system and begins her apprenticeship this year. Emily like Tahlia has a pony club background and will combine Year 12 studies along with her riding Apprenticeship under Lee and Shannon.

Emily (3rd from left) pictured on her RV Induction day.